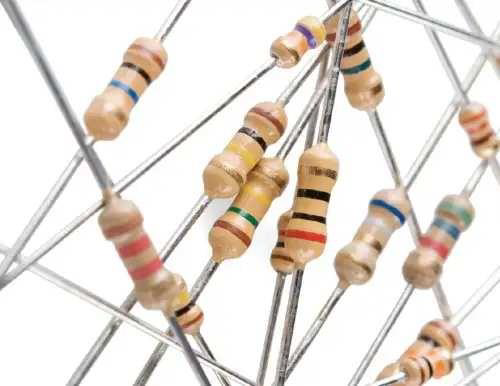 In this article, Resistors and Applications of Resistors we will focus on the list below:

Resistor is an electronic components that limit the flow of current in the circuit.

The electrical resistance of a resistor is measured in ohms.

The symbol for an ohm is the Greek capital-omega: Ω.

Mathematical Relations of a Resistor

There are two symbols for the resistor, a zigzag lines, and a rectangular box.

Either of these two symbol is accepted to represent Resistor.

How resistors are connected in a circuit?

Applications of resistors in a circuit

Application of  Resistor as a Current Limiter:

Placement of correct value of a resistor in series with Transistors, LEDs and other semiconductor components in a circuit limit the amount of current to what they need to function without being damage.

Application of  Resistor as a Voltage Divider:

Resistors are connected together, one after the other, to form a series circuit, voltage ratios will be obtain across each of them.

If the resistors are same value, the voltage drop across each will be equal, otherwise it would be proportion to the resistance of each resistor.

Voltage dividers are useful for components that need to operate at a lesser voltage than that supplied.

Application of  Resistor as a Timer and Frequency generator:

A good timing source can be obtain by connecting resistor to a capacitor.

Such combination can be found in

Variable Resistors allows setting of resistance by sliding a slider or turning a knob. And varying the resistance allow us to changes the amount of current flowing in a circuit.

Variable resistor are used to control the loudness of an amplifier, the pitch of a musical tone, the speed of a motor and light intensity.

Resistors can also be use as:

Applications of Thermistors include:

Applications of Varistor include:

Connection of resistor in a circuit

Electronics Physicist, Computer Technologist, Researcher and a Hobbyist with 7+ years of hands-on experience in Microcontroller programming with C & C++, Electronics Circuit Design, PCB design, Internet of things (IOT), and Automation. Thank you for visiting and taking your time to read my profile. Fiverr Upwork